I just returned from watching a special showing of this movie. I encourage anyone reading this to watch the television premiere on gmc (formerly known as Gospel Music Channel) this Sunday, December 4th and 7 and 9 p.m. EST.

Dax Locke’s story has inspired and continues to inspire countless people, both here in the Peoria area and far beyond. Something tells me it will be inspiring many more for generations to come.

I am really looking forward to taking my kids to see this in a couple of weeks: http://wcicfm.org/dax-locke-movie-preview

It’s a movie based on the true and incredible story of Dax Locke and his family. The special screening of the movie will be shown at the Rave Cinema in Peoria later this month but those of you who have access to the gmc (formerly known as Gospel Music Channel) will be able to watch it wherever you are on Sunday, December 4th.

All proceeds from the event will benefit the “Cherish Every Moment Dax Locke Foundation” in its mission to raise $1.7 million to fund the operation of St. Jude Children’s Research Hospital in Memphis for one day.

If you aren’t familiar with Dax’s story, here is the blog post I wrote last November:

Neither I nor my kids knew Dax personally but his name has come up more times in conversation than I can count.

Two years ago, when Dax was in his final days, we decorated our tree early as a sign of support. His parents said he loved seeing Christmas lights and he wasn’t expected to make it to Christmas Day that year.

We put up the tree early once again last year and this year our tree has been decorated and lit up before Thanksgiving for the third straight time. I hope we’ll keep doing it this way every year.

Decorating the tree is one of my favorite activities. I always loved spending that day with my family growing up and making the tree look special. Lots of great memories from those days when we were all together in our living room.

Carson and Logan love putting up our tree and decorating it too. It’s just a little tree and truth be told, I never intended for it to be ‘our tree’ forever but after we decorated it for Dax a couple of years ago, I think it’s here to stay.

So, we enjoyed putting up the ornaments together this past weekend. We had the Christmas carols playing on the stereo and strung up some lights on the front window as well. It was a great afternoon.

We stopped to pray before getting started and as we remembered Dax in our prayers, my little Logan started crying.

Dax, your story is still impacting people today. As I told Logan, I believe that you’re happy and healthy up there in Heaven and getting ready to enjoy your beloved Christmas with lots of lights and lots of smiles.

God, thank you for allowing this little boy’s story to be seen and heard by so many people and for the continued positive impact it is having both near and far…and to the Locke family, thank you once again for reminding me and all of us about the importance of cherishing every moment. 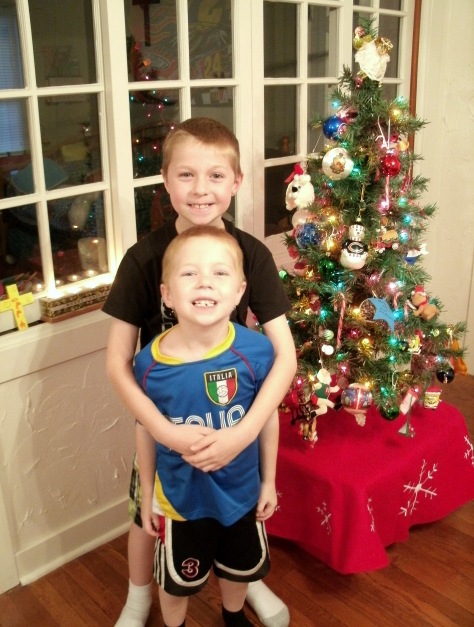 Our Christmas decorations are up. Sure it’s a little early – and for me, it’s much earlier than I used to put them up in the past. That all changed last year…

It is hard to believe a year has passed since little Dax Locke’s story spread throughout the Peoria area and subsequently across the nation. It is equally hard to believe that nearly a year has gone by since Dax departed this Earth after just less than three short years of being here.

Friends, I will admit his story impacted me like few other things ever have in my life. I never met Dax. I’ve never met his parents. But the story of his inspirational battle with leukemia, his family’s efforts to keep him comfortable and happy during his final months, and the incredible amount of support shown by his home community, the entire Peoria area, and literally the entire country really got to me. Still does.

It started small. Folks in the town of Washington decided to decorate for Christmas early last year because the doctors said Dax might not make it until Christmas Day. The added meaning behind this was that he really loved Christmas lights and decorations. Lights were up on people’s houses before Trick or Treaters walked the streets in that town…and it was an amazing sight to see.

But it wasn’t just in Washington. I was reading an article in the Peoria Journal Star one day and it mentioned the website where families could send photos of their Christmas decorations, and Dax’s parents would then show those to him every night in an effort to keep him smiling through his pain. They were encouraging people to do this because Dax literally only had weeks left to live and this was potentially all the Christmas he might get.

That was it for me. I pretty much lost it right there at my desk. On the verge of that happening again as I type this. The thought of this child (or any child) having just weeks or even days to live just made me instantly appreciate so many different things in my life. It really made me believe in cherishing every single moment that comes your way; a sentiment passed along by the Locke’s while they were spending their final days with their son. I can’t imagine what I would do if anything happened to my children. I love them so much. I’m crazy about my kids and I am so thankful for the times I have with them.

My heart hurts for the Locke’s and the countless number of parents (several of whom I know personally) living with the loss of a child. I offer you my prayers and thoughts here today and a hug from afar. I know they are up in Heaven, looking down on you with love. God has different plans for all of us. It sure as heck doesn’t always make sense and believe me, I can attest to this. But He has plans. He knows what He’s doing. I truly believe that.

My sons really became attached to the Dax story last year.  It made me smile when they said they wanted to put up their little tree early after hearing the story about him. From that day on they would pray for him, ask about him, talk about him. We sent him a photo after the kids put up their tree. It was almost like he was part of the family. The day he passed away, it felt like a family member passed away. Telling my children about his passing was like telling them that a family member had passed away.

I will just say Dax that your life on Earth, while short, was meaningful beyond words. In addition to instilling a renewed sense of community in people you provided a true sense of hope and meaning to countless people’s lives. For me, your story taught me to never, ever take a day for granted. I haven’t since and I don’t plan to again.

Life is precious, friends. Make the most of it. Go hug someone. Call up an old friend. Tell someone you love them. End a fight. Forgive someone. Go outside and breathe the the fresh air. Do something you’ve been putting off doing. Make a difference. Follow your dreams. Smile, laugh, cry. Live.

…and thank you God for using this little boy’s story to inspire so many.