A few looks at the Peoria Chiefs baseball team’s post game fireworks show, from the nearby Bob Michel Bridge over the Illinois River… 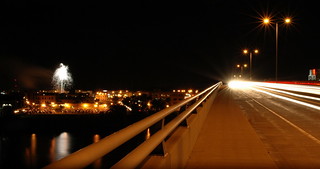 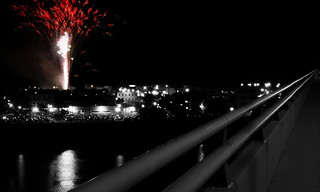 Took the kids to our first Peoria Chiefs game of the year the other night. Safe to say it did not disappoint.

As you can see it was a beautiful night outside. That never hurts. 80 degrees with a breeze…not only does that rhyme but it also feels fantastic.

Enough about the weather, though. The game was great. It was a back-and-forth affair with several lead changes. Ultimately the Chiefs pulled it out and they scored nine runs in the process. That makes for a lot of cheering and clapping at O’Brien Field, not to mention a lot of appearances by the ear of corn dancers (who come onto the field, cued by the ‘Vengabus‘ tune every time the Chiefs score.)

You can’t beat fun at the old ballpark. It’s cliché but it’s so true. After a couple of innings the kids made their way to the playground located behind the center field wall, as they do every time we go to a game there. Offer a playground for kids and kids will be happy to be at your establishment. It’s just that simple.

As we were heading out following the 8th inning (I normally stay but it was a weekday and past their bedtime already anyway, so it was time) my oldest son found his way to the wall near the dugout and managed to snag one of the t-shirts that they shoot out into the crowd. To say he was elated would be quite an understatement 🙂

Little brother’s (mild and very brief) disappointment at not catching one of the shirts didn’t last more than two minutes, as he and his older brother were treated to an even better surprise just a few moments later.

Not bad for a Monday evening.

All of this is just part of what makes minor league baseball great. It’s an atmosphere that may lack some of the aura and the memorable names that come along with the big league teams and stadiums, but what it lacks there it more than makes up for with personality, charm, and a sense of authenticity.

Whatever it is, I enjoy it. My kids enjoy it. I know countless others out there enjoy it as well. So go check out the Chiefs, or whatever minor league baseball team is near you. I’ll bet you’ll have a good time while you’re there.