I had the chance to relax a bit today and in the process, saw some fantastic finishes as part of Rivalry Week in college football.

My beloved Florida State Seminoles weren’t involved in one of those close endings, but a convincing win over the rival Florida Gators to get to within one win of playing for a national title was just fine with me 🙂

Then there was the Michigan-Ohio State game. Kudos to Michigan coach Brady Hoke for going for the win on the two point conversion instead of kicking the extra point and heading to overtime. It didn’t work and Michigan ended up losing by that lone point, but I like the gutsy call anyway.

After that, there was the Georgia Tech-Georgia game. Two overtimes, and a final play that looked more like something you’d see in a pinball game finally resulting in a Georgia win in a back and forth game.

Finally, the finish of all finishes in the Auburn-Alabama Iron Bowl game. The unthinkable! One second gets put back on the clock at the end of regulation in a tie game, giving Alabama a chance to steal a win at the last second and preserve its #1 ranking. Show of hands who predicted Auburn’s Chris Davis to catch the ball after the kick fell just short of the goal post and then run it back within inches of the sideline, through the entire Alabama team and into the end zone to win it and shock the sports world in the process. Yeah, I didn’t see that coming either. Wow.

Unbelievable stuff. What a day! Heck, the night games are barely under way so who knows what else might happen tonight in the wild endings department. But my oh my, it was fun watching some great games this afternoon. College football is awesome! 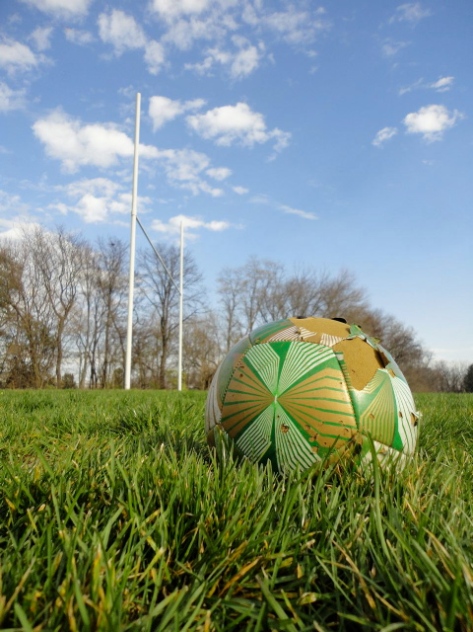 I enjoyed a fun afternoon with my sons and my parents yesterday. All it required was a soccer ball, a football, and a set of goalposts.

We went to a local park and set up shop in a grassy area that happened to have football goalposts set up. The mission? Playing soccer and kicking field goals, of course.

Soccer was first. After some consternation it was decided that we would use the one set of goalposts and play ‘half court style’ where you’d have to ‘take it back’ like you would in basketball.

The teams were set: My oldest son and youngest son versus my parents. I was goalie. And off we went….first team to five goals won.

There was some furious action out there, I tell you. Both sides putting forth a good effort. Shots being taken from left and right. Naturally, it came down to 4-4 with the next goal winning.

After my Dad nearly won it but was denied by a diving fingertip save (I don’t know how real soccer goalies do this on a regular basis with people like Cristiano Ronaldo and Robin Van Persie blazing shots at them) the scene was set for the boys to claim victory.

My oldest passed it to my youngest, and he maneuvered his way for an open shot from about 10 yards out. He curled one past the defenders (aka Mom and Dad) and past the goalie’s outstretched arms, just under the crossbar and inside the left post. Goal! Game over. Oh, the drama…this one would have been a TV ratings hit, I tell you.

Next up? Field goals!

The boys took turns trying their luck at putting one through the uprights. No small task, as these were regulation size. My youngest son was up first and after attempt after attempt, and some helpful coaching from my Dad, he nailed one! Not bad for a six-year-old. After that, my oldest son, also with a little help…and after borrowing my Mom’s shoes (the boy insists on wearing those Crocs shoes no matter what the occasion) he sailed one through as well. Success! Way to go, bud.

It was a good time and a good afternoon. Doesn’t take much to bring smiles around here 🙂