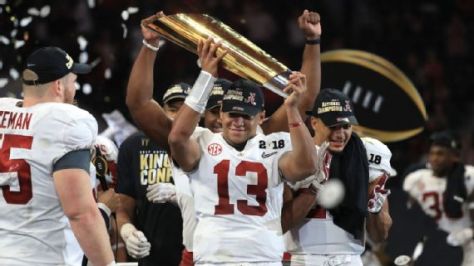 – Did that really happen?
– Alabama is good.
– The happiest person on the planet right now, (next to Nick Saban) is the Alabama kicker. Alright, at the very least, the most relieved person on the planet.
– Did that really happen?
– Georgia fans could use a hug today. Or two. Hug a Georgia fan if you see one.
– Tua Tagovailoa is good. I’m a fan of his, regardless of what jersey he wears.
– The shot of Tua hugging his Dad after the game may have been the best visual of the night, in a game featuring one of the most improbable finishes of all time and some very memorable plays.
– Alabama is good.
– Two freshmen quarterbacks battled it out for the championship. Sure, one fell short, but my gosh, compared to what I was accomplishing (see: not accomplishing) during my freshman year of college…uh, yeah. Impressive work by both guys. Bright futures ahead.
– The Georgia kicker is good.
– Somewhere around 11 o’clock I texted my Dad about what a wild, unbelievable game it was. Somewhere around 11:15, Carson texted me the same thing. Sports brings people together.
– It must have been pretty frustrating for Jalen Hurts to get benched, despite the subpar performance in the first half. Cameras showed him enthusiastically cheering on the team, regardless from then on. Good sport. (Take note, kids…and parents.)
– So, he’s the backup quarterback, he’s asked to come in for the second half of the championship game, brings the team all the way back to even, then he gets sacked and his team is suddenly knocked out of field goal range in overtime, after they had missed a chance at winning the game in regulation, after the other team’s kicker then nailed a long field goal to put them back in the lead, their backs are against the wall…and then Tua throws a perfect, in stride, long touchdown pass to win it all? Sounds like a movie script to me.
– How much confetti is up there in those rafters, anyway?! Do they have everyone bring a lawn bag full of shredded documents with them as part of their admission to the game? Always amazed by the sheer amount of that stuff falling down onto the field after a championship game wraps up.
– I like sports. I really like college football.
– Did that really happen?

Great story of a happy reunion between a college graduate, and the man who helped save her life when she was a child.

Here’s a great example of doing more than just what you might be “supposed to do” and the positive impact it has on others!

http://goo.gl/cx3Sl3
Nelly Has Been Sending Kids To College Every Year For The Past Decade

Here’s a nice story about a music star, who’s been doing some behind-the-scenes work to make a difference in society as a whole.

I had the chance to relax a bit today and in the process, saw some fantastic finishes as part of Rivalry Week in college football.

My beloved Florida State Seminoles weren’t involved in one of those close endings, but a convincing win over the rival Florida Gators to get to within one win of playing for a national title was just fine with me 🙂

Then there was the Michigan-Ohio State game. Kudos to Michigan coach Brady Hoke for going for the win on the two point conversion instead of kicking the extra point and heading to overtime. It didn’t work and Michigan ended up losing by that lone point, but I like the gutsy call anyway.

After that, there was the Georgia Tech-Georgia game. Two overtimes, and a final play that looked more like something you’d see in a pinball game finally resulting in a Georgia win in a back and forth game.

Finally, the finish of all finishes in the Auburn-Alabama Iron Bowl game. The unthinkable! One second gets put back on the clock at the end of regulation in a tie game, giving Alabama a chance to steal a win at the last second and preserve its #1 ranking. Show of hands who predicted Auburn’s Chris Davis to catch the ball after the kick fell just short of the goal post and then run it back within inches of the sideline, through the entire Alabama team and into the end zone to win it and shock the sports world in the process. Yeah, I didn’t see that coming either. Wow.

Unbelievable stuff. What a day! Heck, the night games are barely under way so who knows what else might happen tonight in the wild endings department. But my oh my, it was fun watching some great games this afternoon. College football is awesome!