Ok folks, let’s hear from you. Who will you be rooting for in the big game – the New England Patriots or the Seattle Seahawks? Leave your answer in the poll box below and feel free to expand on why you’ll be rooting for them in the comments section.

Can’t wait for Super Bowl Sunday. I’m a Bears fan but I’ll be cheering on the Seahawks!

I had the opportunity to go to my first NFL game this past weekend, thanks to a friend and former co-worker of mine. Vikings vs Bears at Soldier Field in Chicago. And why just go to the game when you can be down on the field, right??

It was a dream day for me. The light snow that was falling for much of the day made it even more of a neat experience.

While I was there I decided to get back into TV mode…the video above is the result of those efforts. 🙂

Thankful for the chance to enjoy a game, to go ‘behind the scenes’ while I was there, and for a chance to catch up with my friend who I hadn’t seen in probably a decade. Good times. 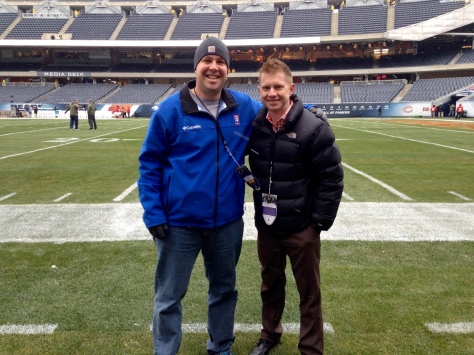 Yes, I did a spellcheck 🙂

Goulden…as in Chicago Bears kicker Robbie Gould who, along with a bunch of his teammates, paid a visit to Washington, IL today.

It wasn’t just a photo-op and leave visit, either. Gould and the guys spent the entire day here, first talking with Washington High School football players, then eating lunch with students there, and then walking through the tornado impacted neighborhoods.

I knew where they were going to be this afternoon so I arranged to pick up my sons from school, but I didn’t tell them why. After turning onto the street where they were and seeing Robbie, I let the cat out of the bag. The boys went crazy. They are huge Bears fans!

We stopped to talk with Erica who works with Robbie’s charity, The Goulden Touch. She gave me a sharpie, then pointed us in the direction of the players and we were off.

END_OF_DOCUMENT_TOKEN_TO_BE_REPLACED

That’s how I describe the post-game remarks made by Devin Hester of the Chicago Bears last night. Oh, go ahead and toss in ‘Refreshing’ as well.

You see, the guy had just broken the all-time record for kick-off/punt returns for touchdowns in the NFL. A pretty significant accomplishment. Not to mention the Bears had just wrapped up the NFC North division title.

A lot of times you hear athletes get up there and talk about themselves at times like that – both right off the bat and then throughout the time they have access to a microphone. This was much different and it was impressive to me.

First thing he did was praise God for all that he has been able to accomplish both on the football field and in his life. Second thing he did was give not some, but all of the credit to his teammates who blocked for him and enabled him to get free on all of those returns. Hester even broke down and had to pause because of the gratitude he had for all of this.

That’s classy. That’s humble. And if I do say so myself, it’s refreshing. So nice to see a superstar remove the credit from himself or herself and direct it elsewhere.

Congratulations Devin, on your well-deserved place in history. Keep up the good work.