Yes, I did a spellcheck 🙂

Goulden…as in Chicago Bears kicker Robbie Gould who, along with a bunch of his teammates, paid a visit to Washington, IL today.

It wasn’t just a photo-op and leave visit, either. Gould and the guys spent the entire day here, first talking with Washington High School football players, then eating lunch with students there, and then walking through the tornado impacted neighborhoods.

I knew where they were going to be this afternoon so I arranged to pick up my sons from school, but I didn’t tell them why. After turning onto the street where they were and seeing Robbie, I let the cat out of the bag. The boys went crazy. They are huge Bears fans!

We stopped to talk with Erica who works with Robbie’s charity, The Goulden Touch. She gave me a sharpie, then pointed us in the direction of the players and we were off.

On the way, we were greeted by a gentleman…who just happened to be Chicago Bears President, Ted Phillips. Enjoyed a nice chat with him and as we were saying goodbye he asked the boys what they thought the score would be in Monday night’s game vs. the Cowboys.

Hoping that Carson would say a lopsided number in favor of the Bears (it is the President of the Bears after all, child) I waited for the response.

‘Probably win by a touchdown,’ Carson calmly replied. I may have visibly cringed…eh, at least he had them winning the game in his prediction 🙂

Phillips smiled and went on to say that he was thinking 28-7. He stopped to take a photo with us and wished the boys well. From there we headed toward the group of players.

What a thrill. Erica brought a few of the players over and the boys got the players’ autographs – on their shirts, which I informed them are never to be washed again.

The players were very humble, very kind, and just their presence seemed to breathe life into the neighborhood we were in. People were smiling. It was a great sight to see. The players joined the kids and others who’d gathered for a group photo and then it was time for them to move on.

But before Robbie walked away, I overheard Carson reminding Logan to tell him he that likes kicking. (The kid is all about kicking footballs…he wants a kicking tee for Christmas.) So I got Robbie’s attention and let him know Logan shares his enthusiasm for kicking, not figuring it would lead to what it did.

What it did lead to was almost surreal. Robbie came up and fist bumped Logan, completely interested in his interest in kicking. Then he brought him over to Mr. Phillips to let him know he had a possible successor for the Bears’ kicking job…adding that he hoped Logan wouldn’t take his job just yet.

That’s when teammate Blake Costanzo upped the ante. He crouched down and set up a pack of Nutter Butter cookies (basically the shape and size of a stick of butter) on top of his shoe and told Logan to kick a field goal with them.

Did I mention it was almost surreal?

So, with the Bears team President and several Bears players looking on, one Bears player holding the ‘football’, another Bears player holding his arms up to make the ‘goalposts’ about 15 feet away, and the guy whose job he was auditioning for watching intently to see what he could do…my seven-year-old kid calmly lined up, then walked up and proceeded to boot that pack of cookies high into the air, end over end, well above (and straight through) the makeshift goalposts, directly into the waiting arms of – Robbie Gould. 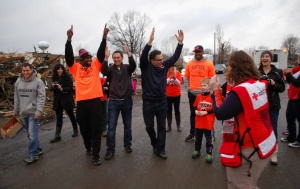 The entire crowd that had gathered around erupted in applause and there were a bunch of shouts let out as well. He really crushed it 🙂

Phillips and the rest of the Bears players lifted up their hands with the ‘kick is good’ motion…and at that moment, I don’t think the tornado destruction was on anyone’s minds. Robbie turned around and made a gesture like he was writing on a piece of paper. He turned to the team President and said, ‘I’m signing this kid.’

It was awesome. Logan called it the best day of his life.

Thank you so much to Ted Phillips, Robbie Gould, and everyone else from the Chicago Bears organization who made the trip to Washington today. You made a lot of people smile today and in the process, truly blessed this community by being here.

***UPDATE #2***
The TODAY Show did a story about Robbie Gould’s visit to Washington! The story included interviews with Carson and Logan and aired Friday, December 20th. Here it is: http://www.youtube.com/watch?v=iJ18IvRKYuc
***UPDATE***
NBC Chicago has picked up this story! Here is the write-up they did about it:
http://www.nbcchicago.com/news/local/Washington-Bears-Fan-Gets-Goulden-Opportunity-234771311.html

17 thoughts on “A Goulden Opportunity”